When asked to describe her research in two words, Anna Krylov says “molecules and light”. The professor at the University of Southern California and expert on quantum chemistry is spending her sabbatical in Hamburg as Mildred Dresselhaus guest professor. At CUI she is combining her expertise in many-body electronic structure methods with Robin Santra’s expertise in light-matter interactions. “Hamburg is where theory and experiment together are pushing the frontiers of light science,” she says. 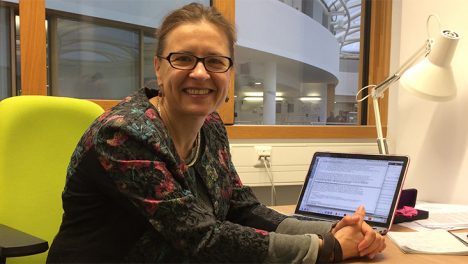 Why quantum chemistry? Krylov comes from a country that, she says, “is not on the map anymore”: the Soviet Union. Despite officially having gender equality, the society was conservative, which explains why her mother was not thrilled when Anna as a sixth grader got hold of molecular biology textbook and saw her future in science. She harassed her parents to buy her a chemistry set and performed “experiments” at home and participated enthusiastically in science Olympiads. When she decided to study chemistry at Moscow State University, her family reluctantly permitted it. Intending to study organic chemistry, she changed her mind, however, when a male friend raved about a theoretical physics program in the chemistry department that was “not suited to a girl”.

Choosing quantum mechanics on a dare

“I chose quantum mechanics on a dare,” Anna Krylov says and it worked. She completed her undergraduate studies with excellent distinction, married, gave birth to a girl – and, for once following her family’s expectations, took a year’s maternity leave. Her “time off” was eye opening. “I understood that giving up my career is not an option,” she says. She returned to the university in 1989, a time of political upheaval. When The Wall came down her professor announced that questions about the Eastern bloc would be removed from the exam, because it had just ceased to exist. “Imagine what that meant for us,” Anna Krylov says.

Two years later, in 1991, the family emigrated to Israel. It was a jump into the unknown. Speaking neither Hebrew nor English, she communicated science using mathematics. Impressing her future advisor, Benny Gerber, she was accepted to the Ph.D. program at the Hebrew University in Jerusalem, where she spent the next 5 years studying molecular and quantum dynamics at the Fritz-Haber Center among world-class experts. Still, she took occasional cleaning jobs to complement the family’s income. “I liked to make things clean and shiny, it made my inner chemist happy,” Anna Krylov recalls.

After graduation in 1996, she moved to Berkeley to work with Martin Head-Gordon. She intended to learn how to use quantum chemistry for studying excited-state dynamics, but she soon realized that these tools simply did not exist. Quantum chemistry of electronically excited and open-shell species was an open frontier, challenging researchers with many hard problems.  Inspired rather than intimidated, Anna Krylov dedicated herself to electronic structure method-development.

From failure came a deeper understanding

“I decided to work in this area because it is extremely challenging. It requires advanced mathematics, a deep understanding of physics, and programming prowess.” It also takes a lot of investment to test new ideas. After joining USC as an assistant professor in 1998, it took her two years to develop her first project – only to discover that the key idea was “garbage”. “That’s not what you want to happen when you are on the tenure-track clock,” Anna Krylov laughs. Yet, from this failure came a deeper understanding of many-body problems. New ideas of how to address strong correlation followed, and they worked. Anna Krylov believes that this failure was instrumental to her ultimate success. She believes that “maximal satisfaction comes from attempting to solve the hardest problems, even if you fail in the process.” As she learned from rock climbing: “Never be afraid to fail. If you never fail, you’re not attempting hard enough problems.” Text: Adler