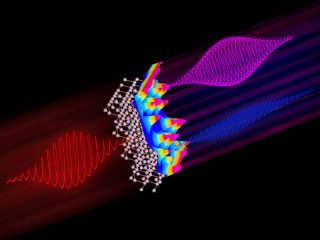 When an intense laser field (red) interacts with a crystalline solid (white), higher-order harmonic fields (blue and magenta) are emitted whose polarization states (linear, elliptic or circular) are determined by crystal symmetry and can be controlled by the strong-field dynamics. The colormap surface shows the ellipticity of the ninth harmonic from silicon. Credit: Jörg Harms / MPSD

The nonlinear process of high-order harmonic generation (HHG) in gases is one of the cornerstones of attosecond science (an attosecond is a billionth of a billionth of a second) and is widely used in many different areas of science nowadays, ranging from physics to chemistry to biology. This strong-field phenomenon converts many low-energy photons from an intense laser pulse into a photon of much higher energy. Whereas the HHG process is well understood in atomic and molecular gases, the mechanism underlying frequency conversion in solid materials is currently still the subject of scientific controversy.

By combining HHG experiments and state-of-the-art theoretical simulations, scientists from Universität Hamburg, DESY, and the Max Planck Institute for the Structure and Dynamics of Matter at the Center for Free-Electron Laser Science (CFEL) in Hamburg now introduce polarization-state-resolved high-harmonic spectroscopy of solids, that permits deeper insights into both electronic and structural dynamics occurring on time scales shorter than one oscillation of the light field. Their work, which is supported by the cluster of excellence “CUI: Advanced Imaging of Matter” among others, is now published in Nature Communications.

The emitted harmonic fields can oscillate in a linear fashion, or they can rotate elliptically or circularly with clockwise or anticlockwise handedness (so-called helicity) – just like a screw of light. The scientists now reveal how the harmonics’ polarization states and their handedness encode valuable information on the crystal structure and ultrafast strong-field dynamics, and how the harmonics’ polarization states can be controlled. Moreover, since the harmonics are created within a single period of the incident driving field, the method inherently comes with a sub-optical-cycle temporal resolution.

The present work investigates the prototype materials silicon and quartz to establish the new spectroscopic technique. Yet the method is versatile and expected to find important applications in future studies of novel quantum materials such as strongly correlated materials, topological insulators, and magnetic materials. Text: MPSD, ed.