Prof. Peter Schmelcher, from the Center for Optical Quantum Technologies of Universität Hamburg, has been elected by the American Physical Society into the executive committee of the Topical Group on Few-Body Systems and Multiparticle Dynamics.

The mission of this group is to advocate, promote, and advance research on few-body systems. 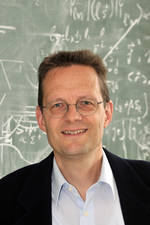 Prof. Peter Schmelcher is a member of the CUI board.

This APS Group is an umbrella organization of atomic, molecular, nuclear, particle, and mathematical physicists, as well as quantum chemists, who are interested in the dynamics of fundamental building blocks of complex matter.Such systems have relatively few degrees of freedom at some energy scale, and their study provides significant information about the dynamics of systems in a given area of physics, as well as identifies features common to systems in a variety of different sub-disciplines. Because of the interdisciplinarity of the group, many of the sessions at APS meetings are held jointly with other Groups and Divisions and feature specific themes from different fields.